It's no secret that the Canon EOS 5D Mark II is being used in low-budget indie films, as well as big blockbuster movies from Hollywood. But it's also become a staple for television commercials.

Geoff Fox has been a weather forecaster for over 28 years in Connecticut and can be seen nightly on WTIC-TV (FoxCT). A couple months ago he posted a behind-the-scenes video of a promo he was in for FoxCT, but quickly took it down because he was told that he was "revealing company secrets".

Company secrets? It's a secret that they used a Canon 5D Mark II for their promos? 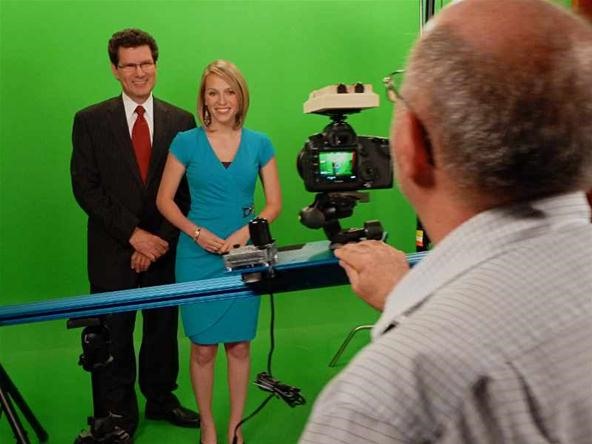 That's beside the point. Though only a half-minute long, the video gives some great insight into the behind-the-scenes magic that goes into making a decent commercial with the 5D Mark II.

In Fox's video, Bill Murphy slides the Canon EOS 5D Mark II down the camera rail system while he films newscaster Brent Hardin in front of a green screen. But what's the coolest part? Murphy's homemade dual laser pointing system that's sitting atop his DSLR, which is needed to match the live action chromakeyed footage with the HDR (high dynamic range) time lapse video in the field.

When the video was all shot, After Effects was used by Chad Sherman to put everything together. Check out the finished product below.

But this is just the beginning of adverts made with the Canon 5D Mark II. Below are some more commercials for inspiration, real ones and school projects.

Want to master Microsoft Excel and take your work-from-home job prospects to the next level? Jump-start your career with our Premium A-to-Z Microsoft Excel Training Bundle from the new Gadget Hacks Shop and get lifetime access to more than 40 hours of Basic to Advanced instruction on functions, formula, tools, and more.

Other worthwhile deals to check out:

Join the Next Reality AR Community

Get the latest in AR — delivered straight to your inbox.

I got a DSLR recently myself to replace my old camcorder, and I've gotta say, it is AMAZING! It's no surprise they're slowly making a rise in the industry!